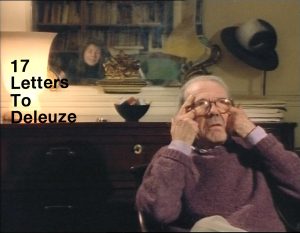 Peter Stamer turns Deleuze’s famous ‘Abécédaire’ into a 90min found-footage video and “writes” 17 letters back to the philosopher, creating a personal portrait of the philosopher, his thinking, and his world-making.

Between 1988 and 1989, philosopher Gilles Deleuze, sitting in his living room, faced questions of a television interview. The principle was as simple, as sophisticated. The topics he was confronted with followed the 26 letters of the alphabet – one letter, one concept, from “A as in Animal”, to “Z as in Zigzag”. To avoid zig-zagging in his discourse, Deleuze received the list of topics beforehand, and although he worked assiduously on the answers, he then improvised during the recordings.

“I would have wished to sit next to him, to smuggle myself into this room, to look over his shoulder, to place myself between Claire Parnet and him, to roam around in Deleuze’s study where they talk and try to take notes or to hum a tune. Maybe the filmic inserts, the discursive captions, the puns I put in between the statements of Deleuze are my way of getting close to him. It is as if I am opening a window to the world, giving way to my point of view on his world, becoming a mute spectator-interviewer who is, however, too late asking questions.”
Peter Stamer